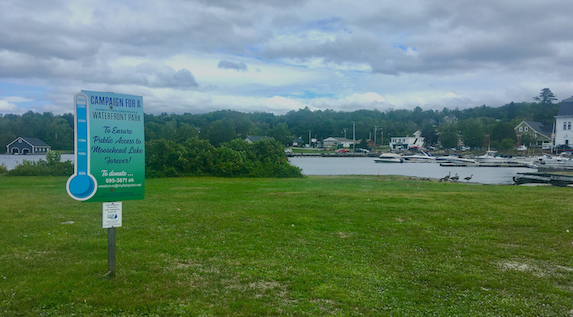 GREENVILLE— This past June, the Moosehead Lake Region Economic Development Corporation (MLREDC) spearheaded the establishment of a waterfront park in downtown Greenville. The property, located on Lakeview Street with beautiful views of East Cove is now named Crafts Landing and Park, with a nod toward the Crafts family, whose history has been indelibly intertwined with the town of Greenville for well over a century. None of this would have been possible without the cooperation of previous landowner Earl (EJ) Richardson, Jr and MLREDC’s partnership with the Land for Maine’s Future Program, the Forest Society of Maine, the Piscataquis County Economic Development Council as well as more than 100 interested individuals, businesses and foundations who helped to make this park a reality. walking path with strategically placed benches will add to the enjoyment of those that visit. When funding is complete, there are also plans for a dock system, which will enable both motorized and non-motorized watercraft and seaplanes to have access directly to downtown.

Plans for the park include a paved plaza with an informational kiosk, as well as plantings of native shrubbery and flowers. A

Unfortunately, due to COVID-19 and other considerations, the plans for landscaping have been put on hold until next spring. “We were not able to do the plantings as we had originally thought,” said Margarita Contreni, Vice President of the MLREDC. “After meeting with Steve Doe, (Landscape Architect, Senior Project Manager at Sebago Technics, Inc.) a few weeks ago and discussing the finalization of plans and details to provide to contractors, we found realistically we had run out of time for this season.” she said. “We will be announcing a request for bids from contractors later this month.”   As it turns out, the town of Greenville has plans of its own to work on Lakeview Street, plans which probably will include tearing up the pavement, grading and resurfacing the road. This could potentially create a better solution for getting electric to the property and possibly allow a contractor to run wiring under the road instead of from the pole across the street. As things unfold next year, the MLREDC will continue to keep citizens of Greenville and interested parties undated on the exciting progress at Crafts Landing and Park.